We could not pick just one all-star this week after the incredible experiences the two new PRestige All-Stars had during Hofstra’s Diamond Weekend, which consisted of this year’s homecoming and a massive celebration for Hofstra’s 75th birthday.

Last week, Charm City Cakes kicked off the festivities when they visited campus to deliver the cake they baked for the university’s birthday. During the weekend, we had two major events. First was the Live at 75 concert featuring Sha Na Na, Blue Oyster Cult, Lisa Lisa, Public Enemy, Fountains of Wayne, and Trey Songz. Cheetah Girl Adrienne Bailon hosted the event. After the all-day concert, there were fireworks which were then followed by a special stand-up comedy show with Jimmy Fallon. He brought lots of laughs in the David S. Mack Sports and Exhibition Center in his Hofstra sweatshirt. As soon as the show finished, he flew back to the city in a helicopter to attend the Saturday Night Live season premiere.

So where do the PRestige All-Stars come into play during this eventful weekend? When people weren’t swooning over celebrities, all eyes were on these two. Bri Gays, a senior at Hofstra University, became royalty when Adrienne Bailon crowned her as Homecoming Queen. Ryan Broderick, also a senior, won a contest held by HaHa Hofstra to open for Jimmy Fallon the night of his show. Needless to say, the student body represented the School of Communications well this past weekend! 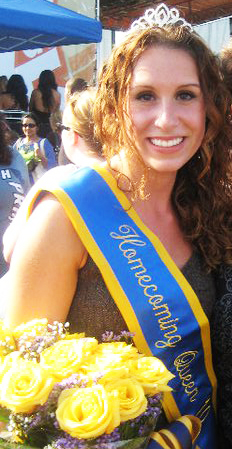 Not only is it a sort of civic duty to give back, but it provides you with a chance to really understand what Pride and Purpose is all about.

Bri had some tough competition on Homecoming Court, but we are so proud a communications major took the crown! Her road to royalty has been an experience the past three years at Hofstra. Check out what Bri has to offer.

Where are you from?
Springfield, Virginia

What made you interested in your major?
When I was 9 years old my Mother took me to see Regis & Kathy Lee in New York City. It was the first time I had ever been on the set of a television show. I immediately fell in love with the fast pace excitement of the production. After the show Kathy Lee came up to me and introduced herself, apparently she liked my hat. And who would ever thought that Gilman liked kids…he liked me. So I was sold.

What are you involved in on/off campus?
For the last three years I have worked as Resident Assistant in The Netherlands, a complex for first-year students. I have been a member of WRHU for the last two years and am currently the Producer of Hofstra’s Morning Wake-Up Call. I am a sister of Delta Phi Epsilon Sorority and a Producer for Hofstra Today (NewsWatch35). I also am a member of Lambda Pi Eta and Phi Sigma Alpha. In addition, I am a Teacher’s Assistant in the RTVF department and a Peer Teacher in the journalism department.

What’s your role at WRHU?
Not only am I a member of the station, but I am the Producer of Hofstra’s Morning Wake-Up Call. The show runs Monday through Friday from 7 to 9AM. We feature national news, international issues, and Long Island Life.

What internship do you have/have you had in the past? If any?
Over the summer I worked at WTTG FOX 5 in the News Department as an intern.

Can you describe your internship for us a little?
At FOX I got the chance to shadow reporters, cover stories with photographers conducting interviews and writing stories. In addition, I had the chance to work with the web department publishing stories for the website. I would attend daily editorial meetings and work with the assignment desk uncovering stories of the day.

Why did you want to be Homecoming Queen?
I applied for Hofstra’s 2010 Homecoming Queen because I had the desire to give back to the University two-fold what it has provided for me. Being so involved in an array of clubs and organizations of campus, I felt I was a good representative of the Hofstra student body and I wanted the chance to serve my peers in a new way.

What were your first thoughts/reactions when you found out you won the title?
You know the whole thing is pretty surreal. I look back on all of the wonderful pictures and I still can’t really grasp the idea that my peers voted me as their 2010 Homecoming Queen. What I remember was Adrienne looking right at me…as I was looking around at the other ladies on stage…then there was my name…I was absolutely shocked. I served alongside an amazing, successful, and dedicated group of Hofstra students, by no means did I think I was getting the crown. If you go on the website there are pictures of me…and I legitimately look confused. When I walked off the stage, it hit me, I was smiling and teary eyed.

Where do you see yourself after Hofstra?
Three years ago I saw myself anchoring the evening news. Today I see my self producing the evening news or working on Capital Hill in Media Relations. Politics is a passion of mine and if producing does not work out, there are other things out there that I enjoy as well.

What advice do you have for anyone else who wants to be an all-star?
Something that I have come to learn in my last few years at Hofstra is a balance. Yes, balancing your time is important, but I’m not referring to that sort of balancing. As a member of the Hofstra community you have to realize it is not all about you. Helping others in whatever facet it might be at the University should be balanced with personal focus. Not only is it a sort of civic duty to give back, but it provides you with a chance to really understand what Pride and Purpose is all about. 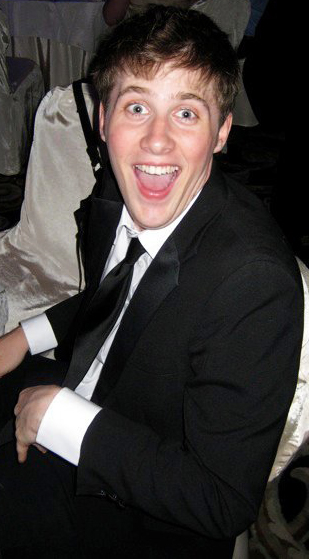 When I heard I stood up and turned to my partner Marc and was like “We did it baby!” and kissed him (I thought it’d be funny).

Ryan and his friend Marc Butcavage were one of two acts that opened for Jimmy Fallon. The initial competition to open for Fallon was not easy. 19 people auditioned and then the final 6 acts performed at the Upright Citizen’s Brigade show at Hofstra where the two winning acts were chosen. Ryan and Marc were the only duo, but they were definitely on top of the competition! Check out how Ryan incorporates his comical side into his major.

Where are you from?
Marblehead, Massachusetts

Major?
Print Journalism with a minor in Creative Writing

What made you interested in your major?
I came to Hofstra as an English major, but I didn’t really like the idea that the English department wasn’t worried about people reading their stuff. But what I really liked about journalism was that they teach you how to sell your writing and write for an audience that might not necessarily want to read, so you have to know how to kind of trick readers. Also, I always wanted to be in and around people work in TV and film on the small hope that I could work with them.

What are you involved in on/off campus?
On campus I’m the head writer for Nonsense Humor Magazine and the Editor-in-Chief of The Hofstra Chronicle. I also play music in a band called Shark Jumper when I’m not racing a deadline.

What’s your role at The Hofstra Chronicle?
As the Editor-in-Chief I pretty much oversee all the sections and departments and make sure everything goes smoothly.

What internship do you have/have you had in the past? If any?
I’ve had some strange ones, my first one was for a women’s sexual health and fashion blog, collecting links. I’ve also reviewed bands for a company based in the Village which was pretty alright until I got sick of indie rock. Most recently I worked for The Awl as a “LOL news intern” finding funny stuff online and writing about it.

Have you always been interested in stand-up? Have you performed comedy anywhere else before?
I’ve always been telling jokes, or trying to, since I can remember. In high school I did improv for four years and I do a bunch of stuff on the web when I get a free moment. I like stand-up though because it’s just a really great way to connect with an audience without worrying about scripts and costumes and whatever else. It’s kind of frightening at the same time, though.

What were your first thoughts/reactions when you found out you were going to open for Jimmy?
It was completely and totally surreal. When I heard I stood up and turned to my partner Marc and was like “We did it baby!” and kissed him (I thought it’d be funny).

What inspired the comedy act you performed?
Our original idea was to just do stand-up as a duo but it was really, really risqué. And my girlfriend heard our material was like “uh, I think this is a family show,” and I was like “oh man.” I wasn’t even thinking about it. So we retooled it and tried to think of the best way to be clean comics and still be a little provocative. Doing a fake orientation seminar seemed like the easiest way to do that.

Did you get to meet Jimmy? If so, how was that?
Meeting Jimmy Fallon was pretty cool, as I was walking away I tripped and fell over a sign.

Want to tell us about your blog?
Haha well, it’s called Student Loans For Beer Money and it’s a Tumblr full of pictures of animals, funny things I make, random thoughts, gross things I find on the internet and just general stuff to waste your time with. It’s also very NSFW so uh keep that in mind if you look at it. Student Loans For Beer Money is also the name of the comedy troupe me and Marc put together this summer.

Where do you see yourself after Hofstra?
I’ve already started freelancing here and there and I could really see myself doing that full-time. It’s exciting and a cool to write and not just sit at home. In the end though I can’t really picture myself not doing something with comedy in some respect. Which probably doesn’t excite my parents too much.

What advice do you have for anyone else who wants to be an all-star?
I wouldn’t call myself an all-star haha, but I guess you should just do what makes you happy and take a risk or two every once in a while.

Do you have what it takes to be a PRestige All-Star? Email us prestigeagency.hu@gmail.com or direct message us on our Twitter!